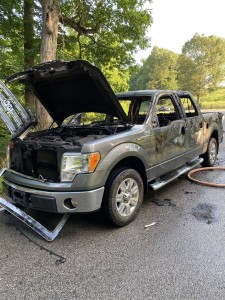 BOWLING GREEN, Ky. – A pickup truck was destroyed, and a driver was injured after firefighters in Warren County say fireworks ignited in the bed of the truck.

Tammy Miller, a witness who was nearby and caught video of the truck on fire with her cell phone.

“We looked up and saw this truck driving down the road with just a huge ball of fire in the back. The whole bed was on fire and I even thought I saw some fire up underneath the truck,” said Miller.

According to the Richardsville Fire Department, the driver was bringing the fireworks home when they ignited in the bed of the truck and the backseat.

“He said that he had gone and picked up fireworks and that he had them in the back and he had a lot of paperwork in the back but he had no idea what would’ve caused that. So we did sit and watch, waited to see if the fireworks would blow up waiting on Richardsville Fire Department. There was a lot of popping and a lot of noise and of course we just kept moving back as things popped,” said Miller.

“Fireworks are dangerous in general. If you do have to transport fireworks in your personal vehicle, be extremely careful. Anything can happen when it comes to transporting goods like that,” said Vincent.

Firefighters say it is still unclear what caused the fireworks to start going off.

One person flown to hospital following crash in Barren County

Man jailed in Simpson County after allegations of sodomy, incest and sexual abuse of a minor