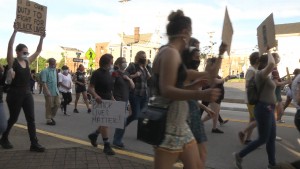 BOWLING GREEN, Ky. – Standing in stark contrast to demonstrations being held in cities across the United States which took violent turns, a group of peaceful protestors marched through the streets of Bowling Green demanding equality when it comes to how African Americans are treated by law enforcement after several recent incidences of police brutality across the nation.

This was the second night of protests in Bowling Green, with Friday night’s marchers demonstrating peacefully as well, despite one of the protestors from that demonstration being struck by an automobile. Police immediately arrested the driver.

Walking with signs and chanting “no justice, no peace” protesters made their way from Circus Square Park to 13th Street, flanked by members of the local faith community, Ryan Dearbone – the president of the Bowling Green-Warren County NAACP and local law enforcement.

The undertone of this rally was one of peace, with several protesters expressing their concern that violent protests in other cities could hurt the message of equality.

Various speakers urged the community to be more vocal and vote, saying the selection of leaders all the way up to the President of the United States was vital to ensuring equal treatment of all Americans.

Three arrested in Glasgow after child found alone in road