Flurries tonight before a warming trend

Good Tuesday Evening! Today has been much calmer but also much colder! We’re going to keep the chill in the atmosphere for the next day or so before embarking on a warming trend through the end of the week. We’re watching for a few flurries to fall tonight (no accumulation, though); we’re also watching for the possibility of storms Friday into Saturday. And some of those could be severe.

TONIGHT
Clouds will thicken and a couple of bands of snow will move across the region. We don’t have much in the way of available moisture, so probably the most we’ll see is a few flurries making it into the lower atmosphere. And that’s an isolated chance. Temperatures will fall to the 20s by morning.

AT A GLANCE
Temperatures climb later this week, with highs in the 60s on Thursday then the 70s on Friday! A cold front will bring those rain and storm chances to the area beginning late Thursday night; those shower chances will last into late Saturday night-early Sunday morning. There’s a good chance we’ll see heavy rain and get some high winds with the system. Flooding could be a concern. 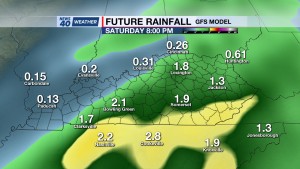 The rain could wrap up as a few flurries Sunday morning. We’ll see cooler temperatures beginning Sunday, along with drier conditions.

Stay up to date with the latest weather information by following News 40 Weather online and on the air, even when the skies are fair!

How the weather could impact the NFL's Kickoff 2021 game