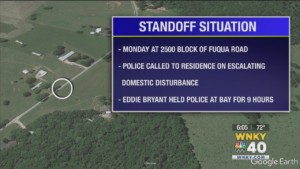 Warren County Sheriff’s Deputies were called to the home at about 9:30 a.m. Monday morning after Bryant’s adult son called on behalf of his mother, according to his arrest citation. The son told dispatchers that his father seemed to be having trouble with his temper and said he had weapons inside the home and was shooting through the floors.

Bryant’s wife had vacated the home before deputies arrived but told them that her husband had three loaded firearms and he was sitting in a living room chair, according to his citation.

When deputies arrived they tried to establish contact with Bryant to check on his well being. He exited the home with one hand visible and went back inside. He again exited with a visible firearm, went back inside him home and barricaded the back door with household items, according to his arrest citation.

As deputies attempted to make contact with Bryant, a deputy who was taking cover in some foliage noticed what appeared to be marijuana plants growing on the property, according to the citation.

Eventually after about nine hours of negotiations, Bryant surrendered without incident.

During the negotiations, deputies obtained a search warrant for the home where they said they found a sawed-off shotgun and four suspected marijuana plants. Bryant denied shooting the floor of his home. Deputies found a bullet hole in the floor and a spent shell casing in the living room/kitchen area. He admitted to having three other guns and said he had cut down the barrel of his 410 shotgun but that it was legal, according to his citation.

Bryant said he finally decided to exit his home just before 7 p.m. due to the efforts of Sheriff Brett Hightower, and the meat in his refrigerator had started to ruin, according to his citation.

He was arraigned Tuesday morning in Warren District Court. Judge John Brown set his bond at $6,000. A preliminary hearing is scheduled in the case Friday.

Protesters return to the streets as Trump decries 'lowlifes'

Dozens remain in line at voting centers across Maryland

Update on the latest in sports: