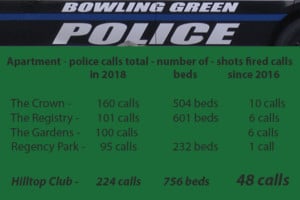 “It’s not very comforting know that that’s happening right outside your door and 50 yards from where you live,” Hilltop Club resident Aaron Graybeal said. “And, knowing the Hilltop Club has a reputation of that and they’re not really doing anything to change those safety issues, that’s kind of alarming, knowing that stuff is continually happening and there isn’t necessarily changes being evidently inputted into the facilities to make it a safer place.”

Police are frequently called to the apartment complex.

“I saw the victim and a friend of his walking kinda toward my room,” Graybeal said. “I’m on the third floor so I kinda overlooked the whole situation. He sat down in a car, so obviously it was after everything had occurred. I didn’t see any shooters or anybody that looked suspect. I believe everybody I saw was in relation to the victim himself.

“It kind of just takes you back a little bit and makes you evaluate your situations in life.

“He didn’t have a tourniquet on his leg for a while but by the time I would have been able to get down there, another person had come down, and she had gloves and got a tourniquet on him, so she knew what she was doing once she got down there I didn’t think I was necessary anymore. I felt like I’d kind of just get in the way so I just stayed put,” he said.

Sunday’s incident is one of 12 shots fired calls this year alone.

The complex is a gated community, but according to numbers from the Bowling Green Police Department, last year, officers were called to the property on Thoroughbread Drive 224 times.

That’s higher than many other apartment complexes in the area.

“I don’t feel like I’m unsafe, but I wouldn’t necessarily say it’s the safest place I have ever been,” said Graybeal.

BGPD statistics also show, since 2016, Hilltop Club has had 48 reports of shots fired on the property.

“It’s not really comforting knowing that this stuff is going on right outside your door,” said Graybeal.

Police continue to investigate another similar shooting that occurred Friday on Vine Street in which another man was shot in the leg.

Bob Hetherington, spokesperson for the Hilltop Club said in a statement to WNKY:

“The management and residents of Hilltop Club are cooperating with law enforcement following an assault on a resident by individuals who do not live in our community.

We have video camera surveillance in common areas of our community. We have shared our video with investigators. And we hope the video assists the Bowling Green Police Department in the apprehension of these suspects.

As part of Bowling Green, the Hilltop Club is not isolated or immune from random acts of violence. We are a gated community where members of law enforcement do reside and where residents are safety conscious and do watch out for each other.”

Woman seriously injured and found face down on roadway

Semi-truck hauling grain overturns on I-65 in Warren County