Nashville man shot to death, body dumped off of interstate 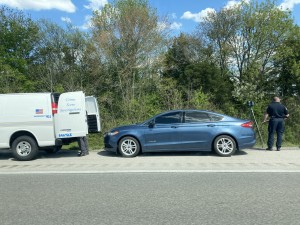 BOWLING GREEN, Ky. – The body of a missing Nashville man was found shot to death on the side of Interstate 65 Tuesday.

A Metro Nashville (Tenn.) Police crime scene processor van was at the scene Tuesday afternoon along with the Warren County Coroner’s van.

Metro Nashville Police Department spokeswoman Kris Mumford said Cold Case-Homicide detectives traveled to Bowling Green where Patrick Jamal Washington, 32, was found shot to death in a grassy area just off the shoulder of I-65 near mile marker 15 in Kentucky.

Washington’s father reported his son missing at 4 p.m. Monday, a few hours after Washington’s silver Jeep was found abandoned on the shoulder of I-65 south in the Madison area with bullet holes in the vehicle and blood visible, Mumford said in a release.

“The investigation to this point shows that Washington was killed in Nashville and his body driven to Kentucky,” she said in a release. “Strong leads are being pursued.”

Local gas stations are running out of regular gasoline