MERRY OAKS, Ky. – Saturday, the remains of an 18-year-old sailor who was killed in the attack on Pearl Harbor in 1941 during World War II was finally laid to rest next to his parents in Merry Oaks.

Navy Seaman 2nd Class Howard Scott Magers was aboard the U.S.S. Oklahoma when Japanese forces attacked the naval base.

Nearly 80 years later, his remains were finally identified, and the sailor was escorted to his hometown in Barren County.

A funeral procession made up of about 40 motorcycles, 50 passenger vehicles, 15 jeeps and several law enforcement vehicles and firetrucks along with the hearse made their way from Hardy and Son Funeral Home in Bowling Green to Merry Oaks United Methodist Church Cemetery.

Todd Matonich, the president of the Kentucky Rolling Thunder, a motorcycle group of veterans who escort the fallen home, said a veteran killed in Pearl Harbor is the oldest missing in action body they have ever had the honor of escorting home. 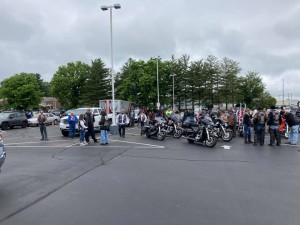 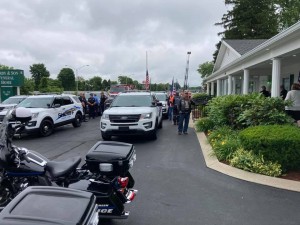 Magers received full honors including a 21-gun salute, the playing of “Taps” and the family received the folded flag from the coffin in a flag folding ceremony.

Before concluding the ceremony, all military members past and present were given the opportunity to salute Magers’ coffin. The line to do so was lengthy, lining up from the coffin, down the aisle, out the back of the tent, and curved around toward the church.

Seeing the young man’s remains finally make it to the gravestone that has been placed over an empty grave for decades, next to his mother and father, was a huge relief for the family according to Amy Arnette, Magers’ great niece.

“My husband and I, we were fortunate to be able to go to Hawaii and actually go to the memorial for the U.S.S. Oklahoma and to see his name there and to pay some honor to him there, but that is nothing like being able to bring him home and to be able to give him the respect and honor and the recognition here that he so deserved,” said Arnette.

Retired Lieutenant Commander Robert Overturf was aboard the U.S.S. Cole in 2000 when it was attacked by terrorists, according to history.navy.mil.

“On a steal Navy ship at sea, there is no 9-1-1. There is no first responder. You are your first responder. You are a firefighter. You are a medic. You are everything. You have to be self-reliant. You and your shipmates. People just don’t understand how difficult it is and the sacrifice that Scott Magers would have made, I can only imagine. Where he was on the ship when the bomb started hitting, I can only imagine how horrific, how chaotic it was at the time,” said Overturf.

Protest for Emmett Till scheduled for Saturday in Bowling Green