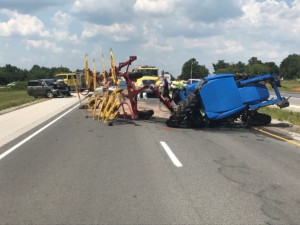 BOWLING GREEN, Ky. – One person is dead and another  injured following a late Saturday morning wreck on Scottsville Road in Alvaton when a passenger vehicle and a tractor with a hay tedder attached to it collided.

Megan Davidson, 34, of Bowling Green was driving a 2018 Chevrolet Tahoe when her vehicle struck the rear of the tractor, according to a release from Kentucky State Police. The Warren County Coroner’s Office pronounced Davidson dead at the scene.

Willoughby was listed in stable condition as of 5 p.m. Saturday, according to KSP.

This story has been updated from an earlier version to include additional details.

1 brother killed, another airlifted to hospital after Simpson County wreck

Woman seriously injured and found face down on roadway