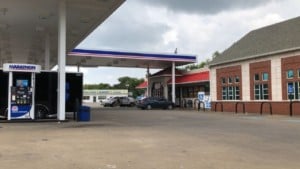 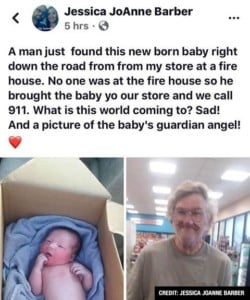 A Good Samaritan found a baby boy in a cardboard box Saturday morning in front of the Gott Fire Station on Porter Pike.

The baby appears to be a newborn, Warren County Sheriff’s Office Sgt. Curtis Hargett said. The Good Samaritan was on his way to work when he stopped to get a drink from a vending machine in front of the fire station and saw the baby, Hargett said. He took the baby to a nearby convenience market and called law enforcement at 6:42 a.m.

Kentucky has a safe haven law that allows people to leave babies at a firehall, police station or hospital. But the law requires that a baby is left at a staffed facility, Hargett said. Gott Fire Department is a volunteer agency and is not staffed 24 hours a day.

Jessica Barber is a cashier at the Marathon gas station where the man brought the baby to. “I just wanted to pick him up and show him some love. He looked like he needed to be held. My whole day has been turned around because of this morning. God works in mysterious ways. He led him to that baby. That man was the baby’s guardian angel. If it weren’t for him, who knows if the baby would have made it or not.”

The person who abandoned the baby could face criminal charges, he said. "It would be no different than dropping off a baby in a field or something like that," Hargett said. Deputies called Child Protective Services, and the baby was taken to a local hospital, he said.

The baby appeared to be healthy, he said. Anyone with information about the baby’s mother is asked to call the sheriff’s office.

Man killed as gunfire breaks out on Kentucky highway