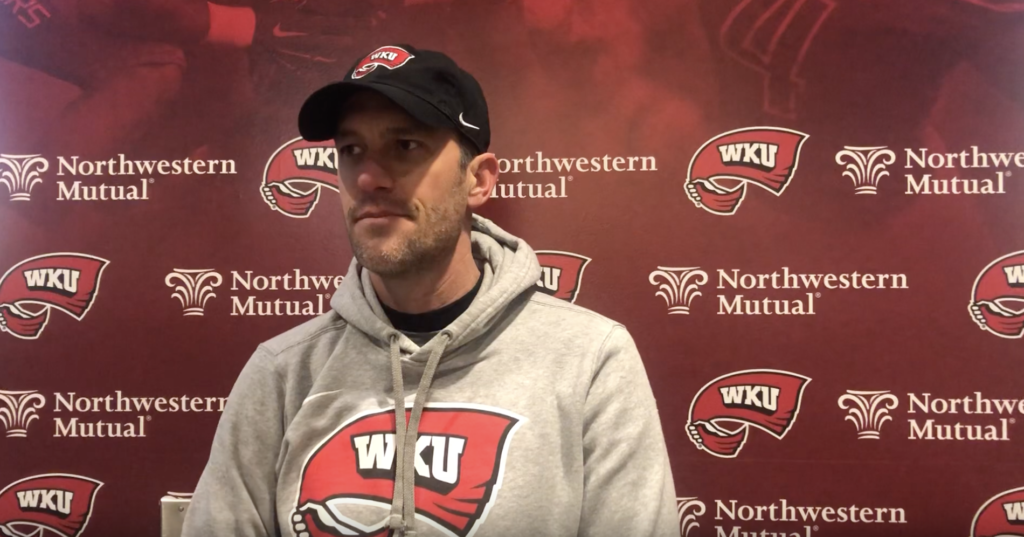 According to the league office, Tyson and his father, Kim Helton (Houston in 1996 – with Tyson on the team as a freshman), are the only father-son duo to each be named Coach of the Year in C-USA’s 25-year history in any sport. The Heltons are the first father-son duo to each be named Coach of the Year in any FBS league since the Bowdens – Tommy (Clemson in 2003) and Bobby (Florida State in 1993 and 1997) – in the Atlantic Coast Conference.
This is only the sixth conference Coach of the Year honor in program history, with the previously-mentioned Harbaugh, Jimmy Feix (1973, 1978 and 1980) and Nick Denes (1963) as the only other WKU head coaches to earn the recognition.
Helton helped lead WKU to an 8-4 record in his first season as a collegiate head coach after inheriting a Hilltopper team that finished with a 3-9 mark in 2018. At a five-game improvement, WKU owns the third-best turnaround in the nation this year. The Hilltoppers were voted to finish fifth in the East in the preseason C-USA poll, but concluded the year tied for second with a 6-2 league record.
WKU boasts notable wins over four bowl teams (9-4 UAB, 7-5 Southern Miss, 7-5 Charlotte and 6-6 FIU) as well as only 1-of-2 C-USA victories over a Power Five opponent this season; a 45-19 statement win at Arkansas in which the Hilltoppers led 35-7 at half time. The Hilltoppers also claimed a 17-8 win over Army, a game in which WKU “out-Armyed Army” – winning the time of possession battle 38-to-22 and out-rushing the Black Knights 225-to-137.
The Hilltoppers garnered two other superlative awards, as junior defensive end DeAngelo Malone was named 2019 C-USA Defensive Player of the Year and graduate senior quarterback Ty Storey earned 2019 C-USA Newcomer of the Year recognition.
Malone is WKU’s first league Defensive Player of the Year since linebacker Xavius Boyd and defensive end Quanterus Smith went back-to-back in the Sun Belt Conference in 2013 and 2012, respectively. Meanwhile, Storey matched quarterback Mike White’s honor in 2016 as the Hilltoppers’ second C-USA Newcomer of the Year in six seasons in the league.
Malone anchored the top scoring defense in the league, ranking tied for fourth in the country with 21.0 tackles for loss and 11th in the nation with 11.5 sacks. The Atlanta, Ga., native set the WKU FBS Era record (since 2009) in tackles for loss, while becoming only the fourth defender in all-time Hilltopper history with double-digit quarterback takedowns. Malone ranks tied for 87th in the country with 7.5 total tackles per game, which is 1.5 more than the next-best trench defender (Jessie Lemonier of Liberty, who ranks tied for 251st with 6.0 per game).
On Tuesday, Malone was voted to the 2019 C-USA First Team by the league’s 14 head football coaches. He also appeared on the 2019 Ted Hendricks Award Watch List, which honors the top defensive end in college football. After recording 1.5 sacks and scoring his first career defensive touchdown at Southern Miss, he was named C-USA Defensive Player of the Week for the first time in his career. During the season, Malone was named to the Pro Football Focus C-USA Team of the Week on four occasions.
Storey has gone 7-2 in nine games as the WKU starting quarterback, completing 206-of-294 passes for 2,209 yards, with 12 touchdowns and only five interceptions. His 70.1% completion rate is seventh in the nation, behind only Heisman Trophy finalists Joe Burrow of LSU and Jalen Hurts of Oklahoma and a few others. The Charleston, Ark., native has added 105 carries for 246 net yards (369 gained, 123 lost) and seven rushing scores; while also catching an eight-yard touchdown pass from wide receiver Lucky Jackson for good measure.
In a victory in his return to his former school Arkansas, Storey completed 22-of-32 attempts for 213 yards – 202 of those in the first half – and a 69-yard touchdown pass. He also rushed 17 times for 77 yards and two scores; all career highs in the ground game. After that performance, Storey was named C-USA Offensive Player of the Week and was subsequently voted Manning Award National Quarterback of the Week – the first Hilltopper in program history to earn the honor.
WKU will have the opportunity to triple its 2018 win total and win a fourth bowl game in the past six seasons on Monday, Dec. 30 in the SERVPRO First Responder Bowl against Western Michigan. Kickoff at SMU’s Gerald J. Ford Stadium in Dallas will be at 11:30 a.m. and be broadcasted on ESPN.