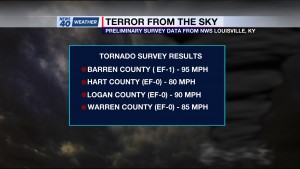 In Barren County, an EF-1 tornado was confirmed to have travelled about ten and a half miles from Carden to Hiseville, packing 95-mile per hour winds along the way and damaging barns and other buildings on some farmland.

An EF-0 tornado, with 85 mph winds tore a path about five and a half miles long through parts of Logan County near the community of Olmstead. Meteorologists at the National Weather Service believe this was the same tornado that crossed into Logan County from neighboring Todd County.

In Bowling Green, an EF-0 tornado caused damage to apartments and businesses near Cave Mill Road even though the tornado was only on the ground for just under a half-mile. Straight-line winds also caused damage along Scottsville Road as part of the same storm cell.

A barn and nearby house in the Hart County community of Priceville also received damage from an EF-0 tornado that was on the ground for four-tenths of a mile.

In addition to the tornadoes, strong to severe thunderstorms and flooding rains raked the area beginning New Year’s Eve night into the early evening hours of New Year’s Day.

Three arrested in Glasgow after child found alone in road