BOWLING GREEN, Ky. – Around 3:20 Sunday afternoon, a dog was taken from his kennel and removed from the Bowling Green-Warren County Humane Society, according to employees.

Images and security video depict a group of three suspected individuals standing around Boss’s cage and one removing him and taking off.

According to the shelter employees, Boss and the individuals were last seen running down River Street toward 31 W. Bypass.

Lorri Hare, the director of the shelter, released a statement saying:

“We have no idea why this person would not have just talked to staff members about reclaiming this dog. Instead, they ruined security equipment and kicked in a gate, doing about $1000 worth of damage.   Their actions will cost the humane society money that could have otherwise been used to save lives! We will be attempting to press charges.”

News 40 has reached out to the Bowling Green Police Department for the official report on the incident and will update with more information when it becomes available. 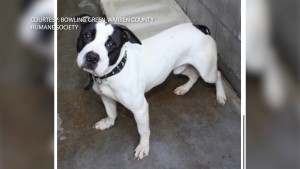