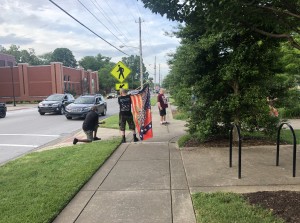 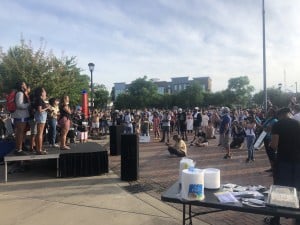 The peaceful event began at Circus Square Park and featured several speakers. The crowd was diverse in race and age with many carrying signs that read “Black Lives Matter.”

The event was organized to protest police brutality committed against black Americans. It follows the death of George Floyd in Minneapolis and Breonna Taylor, who was in her bed when Louisville police entered her apartment on a no-knock warrant and shot her to death.

Friday would have been her 27th birthday. Many people brought flowers in observance of Taylor’s birthday and organizers had a cake in her honor.

One man stood across the street from the protest and held a flag that was part American flag, part Gadsden flag and part Confederate flag. The controversial flag is often associated with white supremacists.

Local cobbler's business and home saved by support from community

Kentucky man charged in storming of US Capitol

Arrest made in Bowling Green murder