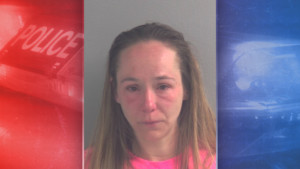 RUSSELLVILLE, Ky.- A 31-year-old Russellville woman is behind bars after video captured her running away from police with her 6-year-old daughter and a toddler in a stroller.

The incident occurred Wednesday on East 3rd Street in Russellville.

According to an arrest citation, police were notified of a disturbance at the Jesus Community Center involving Kayla Hall.

Police say they made contact with Hall near the community center and she was confrontational and refused to cooperate. The arrest citation states officers could smell alcohol on her.

Police say Hall then fled on foot, pushing her 1-year-old in a stroller, while telling her other daughter to run.

Police were able to catch Hall about one block away.

Video sent to WNKY from MJ Jones shows the pursuit and Hall flailing her legs as two police officers work to place her into the back of a patrol car.

Neither child was harmed. Social Services was contacted and took the children to their father.

Hall has been charged with endangering the welfare of a minor, wanton endangerment, resisting arrest and fleeing or evading police.

She is lodged in the Logan County Detention Center.

Afghanistan running out of oxygen as COVID surge worsens