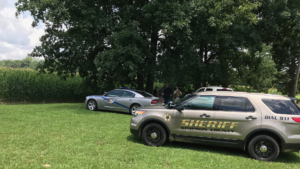 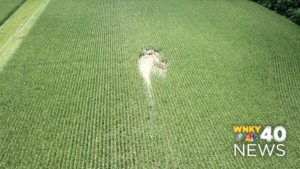 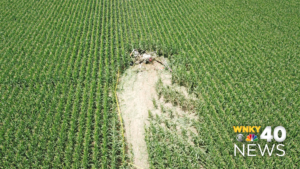 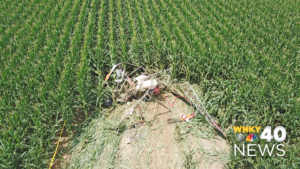 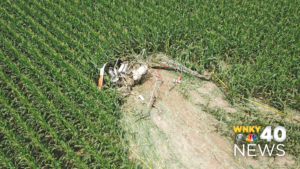 The chopper was dusting crops when it went down.

With the help of drones, emergency crews searched the area for well over an hour before finding the wreckage in a tall field of corn, which posed a huge challenge in finding the crash site.

“Finding out for sure where it was at and then dealing with eight to ten foot tall corn and the heat,” said Palmer. “The heat’s the big deal today.”

First responders were notified of the crash when the pilot showed up at an emergency room at Medical Center of Franklin and told medical personnel there he had crashed the aircraft, Palmer said.

Kentucky State Police identified Anthonie Christoffel Vos, 35, of Sevierville, Tenn., as the pilot of the 1973 Tomcat MK6c helicopter, according to a release from KSP. He was crop dusting in the Kummer and Schweizer Roads area.

Vos was treated for minor injuries and released.

“I can tell you he’s lucky,” said Palmer. “He went in pretty hard, pretty short.”

There is no worry of any extra environmental damage due to the crash.

“I would say the environmental impact is zero to almost nothing,” Palmer said. “What’s out there was supposed to go on the crops anyway. It’s not gonna go anywhere from there.”

State police contacted the Federal Aviation Administration for further investigation of the crash.

Novak Djokovic enjoys himself with fans back at Italian Open

Local gas stations are running out of regular gasoline