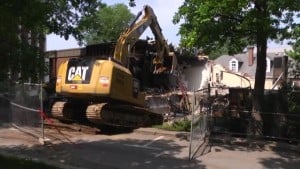 BOWLING GREEN, Ky. – Western Kentucky University has continued construction across the Hill, adding Tate Page Hall to the list of buildings coming down.

Demolition also remains underway on Garrett Conference Center which has been around since 1951. Originally is was built to he a student union.

It went through many changes throughout the years, which led to it having two cafeterias, 14 meeting rooms, three conference rooms and a ballroom.

Local agencies challenge one another to participate in fundraiser 5k

Runners raise money for scholarship in honor of fallen soldier

New Details: No room to refrigerate deceased in Warren County

One taken by helicopter medics after single car collision